The main features of SVM and SVPWM (space vector modulation technique). It also tells the differences among SVPWM, PWM and SPWM.

SVM(space vector modulation) or SVPWM is also called Space Vector Pulse Width Modulation. The main idea of SVPWM is taking the three phase motor stator flux circle as the reference standard, and implement suitable switch based on the different switch modes of three-phase inverter to form a PWM wave, and to track their exact flux circle based on the formation of the actual flux vector. Compared with the traditional SPWM method, SVPWM regards the converting system and the asynchronous motor as a whole so that the model is relatively simple, but the real-time microprocessor control becomes much easier. 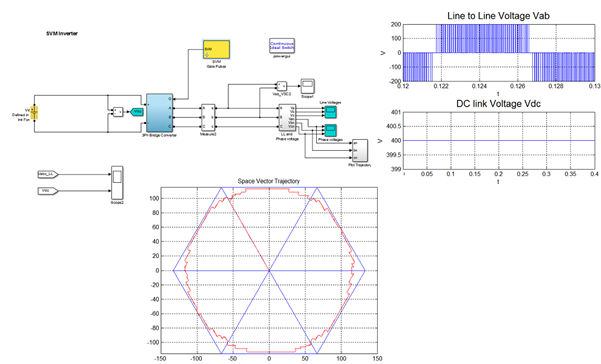 SVPWM Comparing with PWM and SPWM

SPWM: sinusoidal pulse width modulation divides the sine half wave into N parts, in each part, after the comparison of Ut triangular wave carrier and three-phase sinusoidal reference voltage signal Ura, Urb and Urc, the generated SPWM pulse sequence waves Uda, Udb, Udc would be regarded as the driving control signals of inverter power switching devices. The fundamental wave of inverter output voltage is the fundamental sine wave required during modulation, so basically the amplitude and frequency of SPWM frequency inverters output voltage can be adjusted by the adjustment of the amplitude and frequency of the sine wave reference signals. 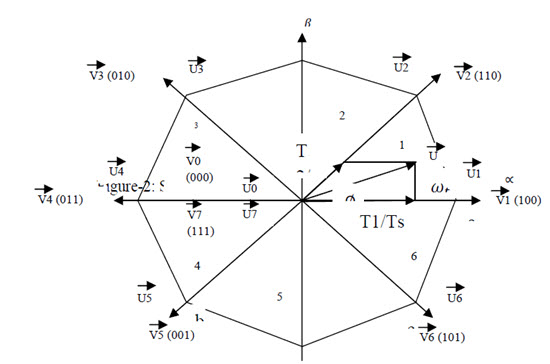 1. For space vector modulation technique, there is repeat switching between each cell only relates to one device switching, so the switch consumption is small.

2. Using the voltage space vector to generate the three-phase PWM (what is PWM?) wave directly to simplify calculation.

3. The inverter output line voltage fundamental maximum value is the DC side voltage, which is 15% higher than the output voltage of common SPWM inverter.